Anemone Dainty Swan is quite different in that it:  has large semi-double white/but tinged pink flowers with deep pinkish/red banding on the reverse. The flowers elegantly stand on striking dark maroon stems. and of course they nod to show it off in the evening! Display with a pretty rod iron support if you like but not needed, to add some decor to your garden! The early blooming season starting in June of Dainty Swan’s  is the special advantage of this anemone, as are the other cultivars in the Anemone Swan Series as well.

Height: 18”
Blooming time: continuously from June to end of October, that is value!.
Zone 5-8
Plant in fertile soil, sun or part shade. 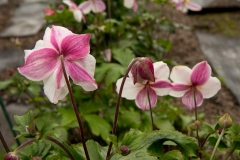 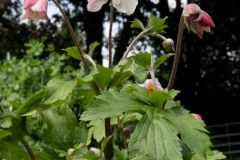 *During the past 12 years, since Anemone Wild Swan appeared to be so promising, the breeder, Elizabeth MacGregor of Scotland, has been developing variations now included in the Anemone Swan Series. These have more Anemone x hybrida in their breeding than Anemone Wild Swan (#1 award winner of Chelsea Flower Show), but have retained the clump forming and early flowering attributes, as well as the attractive deep color bands on the flower reverse.
« Anemone ‘Dreaming Swan’ uspp#27384
Anemone ‘Elfin Swan’ USpp30496, EU52567 »