Elfin Swan is another New cultivar and different, in the Anemone Swan Series showing a mass of white, violet-blue-backed flowers, as per the Swan Series a super feature is that they are earlier blooming than other anemone’s starting in June until the late autumn and Elfin Swan is no different! This is a cutie and provides quite the abundance of flower display!

Height only 16” to 18” flowers standing not to high above foliage
Blooming time: June through October
Zone 5-8 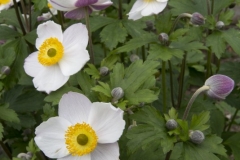 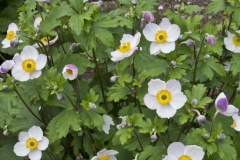 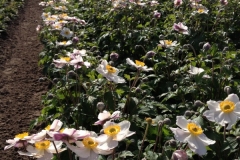 Since Anemone Wild Swan appeared to be so promising, the breeder, Elizabeth MacGregor of Scotland, has been developing variations that are now included in the Anemone Swan Series. These have more Anemone x hybrida in their breeding than Wild Swan, but have retained the clump forming and early flowering attributes, as well as the attractive deep color bands on the flower reverse.
« Anemone ‘Dainty Swan’ USpp29426, EU 52568
Anemone ‘Ruffled Swan’ USpp27383, EU49032 »