the award winning Anemone Wild Swan’s elegant large flowers have a  pure white face, highlighted by a circle of crisp chartreuse colored stamens, and the  rich  lilac blue banding on the reverse of the sepals is the show stopper!

The flowers are held well above the attractive neat green foliage, at twilight the flower closes to a nodding lilac-blue and white bell. Wonderful as a long lasting cut flower, a great idea for wedding bouquets!

This Anemone hybrid is very unique among herbaceous perennials with a female parent plant of rupicola, making it a larger and more vigorous plant, continuous prolific flowering from late May  until mid November frosts, much longer than Japanese anemone hybrids.

2011:  Chelsea Flower Show Plant of the Year award to Anemone Wild Swan
” The award has been given to a marvelous performing new perennial plant. Not only does it exhibit a long flowering habit but is also an exciting flower “.
” I am absolutely thrilled that Wild Swan” has been voted plant of the year “, says Jim Gardener, Director of Horticulture at the Royal Horticultural Society. ” This plant is going to be a great addition to the border with its subtle shades and longevity of flowering. ”
2013: Farwest Show, Portland Oregon,U.S.A. “Best in Show” entered by Monrovia Growers. 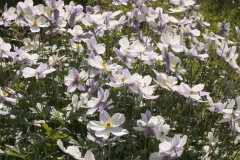 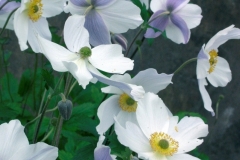 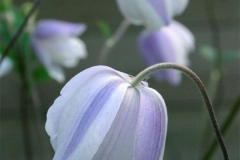 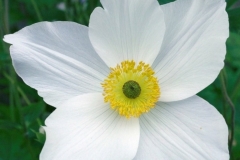 Flowers: white/ lilac blue bands on the back , 7-9 cm across open through the day, then flowers close to bells with a beautiful nodding habit in the evening and early morning.

Zone: 5-8 the plant has been observed grown outdoors in Scotland since 2004 and proved to be perennial hardy to minus 10 degrees C (14 degrees F)

Care:  Wild Swan is very well behaved, it stays where you put it and does not invade its neighbors as can happen with Japanese Anemones.  It has a vigorous habit and does best in a rich and fertile soil which does not become too dry, but good drainage is important.  In the south, dappled shade would be a good environment.Later flowering benefits from removal of spent flowers As it is such a heavy bloomer adding some fertilizer from time to time is helpful.