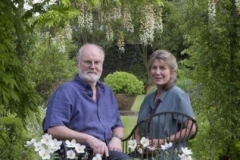 Anemone Wild Swan was established in 2001 and trialed extensively in the MacGregors’ nursery in  Kirkcudbright Scotland.“The plant is just so different, purple /blue at the back and white at the front and it flowers for such a long time.! The nodding effect in the evening is unique.  It’s just a brilliant garden plant and that is why it was entered and eventually won the top recognition at Chelsea.”

Elizabeth’s increasingly passionate interest in plants and gardening eventually had to become a way of life, so in 1988 the family moved to Kirkcudbright, a delightful town and fishing port in the south west of Scotland. The nursery has always concentrated on unusual hardy herbaceous plants, sold mainly by mail order and by exhibiting and selling at the larger flower shows in Scotland and England. Once Anemone Wild Swan appeared to be so promising, Elizabeth has been developing variations and they now include and it has become the Anemone Swan Series, Wild Swan has the rupicola x ,while these others have more of anemone x hybrida in their breeding, but have retained the clump forming and early flowering features. Dreaming Swan, Ruffled Swan, Elfin Swan and Dainty Swan are included and all have the attractive variations of  color bands on the flower reverse.

In 20 years of exhibiting, Elizabeth and Alasdair have been awarded countless medals for floral displays, including 9 gold medals from the The Royal Horticultural Society, with awards for the most creative display and the best floral exhibit at R.H.S. Tatton Park.

Over 50 new plants have been introduced by the nursery over the last 23 years!

For information on the Anemone Wild Swan  please visit this page